Persistence of Theme and Place and Time

At some point, when I was writing my novels as fast as I could to keep up with the stories rushing through my mind, the last sentence I would ever write came to me. I know what it was long before I ever began to write the book in which it appears. I won't give it away here, but it came to me, fully formed, long before I know how it would fit it.  I have, indeed, not written a sentence of fiction since then. It must be five years or more since I finished. I don't miss it much. I sort of marvel at producing so many stories and so many characters over such a sustained period of time. That said, now and again, I get the idea for a story. This is the way it used to be. When I was still writing Heroes, the idea for Smoke came to me one day. I was ready to abandon Heroes and start Smoke at once. But, of course, I did not do that. I have noticed that whenever an idea comes to me now, it is always something I have done before. The one image that I most often have is of someone walking through the ruins of Detroit looking for something. Then I realize how often I have done that already. Think of City of the Dead and certainly Home.  That said, the idea still comes back to me with some regularity. Lately, I have envisioned a book about a man walking through the mostly empty Detroit and he is either chasing someone in slow motion or being followed. And that's it. That's the whole idea. If I were still writing, perhaps that would have turned into something.  There is one image that has stuck with me for the longest time.  It is Garvin and Hofmann, sitting in an unmarked car watching a house.  Garvin is very nervous about something. He is smoking and fidgeting. Hofmann, as always is stoic and calculating. But I don't know more. I don't know who is in that house or what is going to happen. The truth is, I could have gone on writing Hofmann and Garvin stories for another twenty years. Everything about them is so a part of me that I can picture them and hear their voices. But I am done. I wrote the last sentence I ever would, just as I heard one day when it was not connected to anything.
Posted by Unknown at 3:49 PM No comments:

I heard yesterday from a friend mine, someone who is really much more than that. He told he was getting married the next day. This morning, I learned he had gone and done the deed. What a wonderful thing this. Getting married for the first time at 51 to a woman who is just perfect for him.  I have this notion that as I age, my ability to experience anything from rage to joy folds back into a perpetual state of neutrality. Nothing seems to matter that much anymore. I heard somebody once put it this way: "Do you feel less significant as time begins to reel you in?" That rather nicely sums it up.  But, then, something like this comes along. I guess that not every part of me has gone somnolent.  The news of this marriage brings me such great happiness that it makes me think that perhaps there is even more good things to experience before time reels me in.  All the best to my friend and his bride, two truly good people who were  blessed to find each other.  Steve and Mary, wed November 17, 2012 in Oak Park, IL.  I could not be there in person, but I was with you nonetheless.  May you long endure in each other's company. Let time reel somebody else in.
Posted by Unknown at 1:53 PM No comments:

The wait is over. You can now get your copy of Heroes on Amazon.

Go, buy, let me know what you think.

Heroes
Posted by Unknown at 5:37 PM No comments:

I've Never Been There

I am talking to this woman and I tell her I grew up in Detroit. I've never been there, she says. I wonder if she is thinking that Detroit is some place, some real place where you can go and walk around and see things and note all the interesting places you want to tell the people back home about. I saw a tire, a giant tire, right there by the freeway, looking like it was going to roll right into the cars going by. It was the craziest thing. How could this woman or anyone else know that Detroit is not some place, another stop along the way? How could she know about the nothing that is not there and the nothing that is? Or how the nothing that is rolls out from no center towards no horizon, moving too slowly to allow you to see how things are different now, stuck, instead, thinking it had always been this way.  Where are the people who once lived in the houses that no longer remain? Did anyone ever rise here and go to work and come back in the evening? Was it ever so? How strange to be stuck, frozen in place, between going and gone.

Detroit? I've never been there.
Posted by Unknown at 4:17 PM No comments:

If it were done, it were best done quickly

I got the finalized version of  Heroes back and uploaded it to Amazon today. Now I have to deal with this panicky sense of wondering just what it is that I have gotten myself into. Damn long road from here to the Nobel Prize, eh?
Posted by Unknown at 5:52 PM No comments:

Too Dangerous To Enter?

I see the Detroit Police are warning people not to even go into Detroit because it is too violent.  It sounds as if this is partly posturing by the police union. But, I think there is some truth to this assertion. So many people repeat the mantra that "Detroit is coming back," without ever thinking it through. I am guessing these people have not been there lately and seen the acres upon miles of abandoned homes.  It is stunning to consider the decline of Detroit.  Is it a warning of things to come? An aberration born of unique circumstances? I don't know. I am not smart enough to figure these things out. But, before you tell someone that "Detroit is coming back" take a little time to grasp the enormity of the destruction of the place.
Posted by Unknown at 4:19 PM No comments: 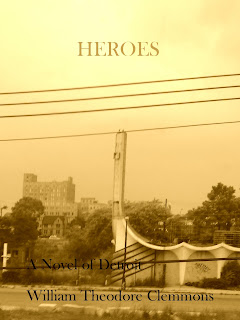 This is what I am thinking about for the Heroes cover.  Suggestions? Ideas? Criticisms? How would you judge this book by this cover?
Posted by Unknown at 11:11 AM No comments:

Nice breakthrough on the cover design today. I like the way it looks. Stark, clean. I hope readers agree.
Posted by Unknown at 5:23 PM No comments:

Very soon, the prep work will be done and Heroes will be available on Amazon. Check in here often to see when the actual publication date will be.
Posted by Unknown at 5:47 PM No comments:

All Things Are On Fire

Go Behind The Gates

City Of The Dead

My Offence Has The Primal Eldest Curse Upon It

I Had To Bring In The Apples

The Universal Longing. . . To Go Home